Astronomy quiz tomorrow includes 18 of these. Student must answer in the form of a question. Generator is found here. Do you know the answer? 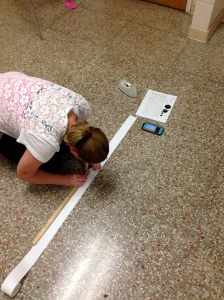 Astronomy students using adding machine paper to scale out the solar system using 10 cm = 1 AU. They soon figured out that the Oort Cloud would be nearly 3 miles away!

It was a long but fulfilling day today as I did FIVE – one hour planetarium presentations back-to- back for our 8th graders. We combined their visit to the HS planetarium with some orientation for next year, all in all a good idea. Earlier in the week our ESL teacher asked if I could do a small presentation for three first graders who love studying about the solar system. The girls were from China, Vietnam, and Puerto Rico and were whip smart. They sent touching thank you notes the next day with some candy as well. Nice to make a difference this week 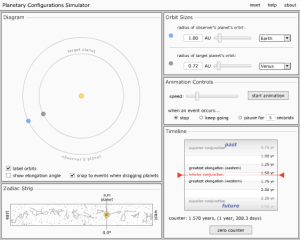 As the astronomy students are introduced to Kepler’s Laws of Planetary motion, they learn how to draw ellipses and calculate eccentricity. They do some light reading on Ptolemy’s geocentric view of the universe and his epicycles. This gives me a chance to show the video clip below (showing epicycles can be used to explain just about any movement, right or wrong).

After the astronomy students looked at the sun with their eclipse glasses they set about gathering some data to calculate the diameter of the sun. They projected the image of the sun on to millimeter ruled graph paper. Knowing the distance between the pinhole and the image, the distance to the sun, and the relationship between similar triangles, they came up with 1,500,000 km as a diameter (error of less than 8%). 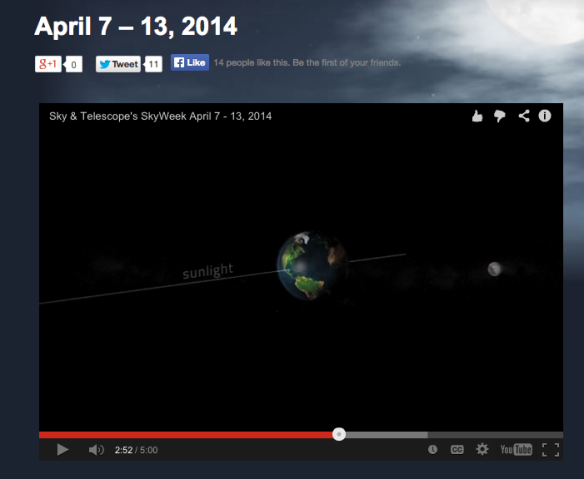 Last weekend I caught the short Sky and Telescope feature that often runs on PBS when a program ends before the hour. Tony Flanders is the host and he always does such a nice job of highlighting what is in the sky that week or the next. This past week, the program’s feature was the upcoming total lunar eclipse of April 15th. I was struck by a small error (or at least I thought it was) in an animation that showed the Moon’s orbit. Could it be that they showed the Moon orbiting clockwise from a north polar view at the 2:45 mark? I emailed Sky and Telescope and this morning received a reply from Tony Farmer that reads, “You mean at 2:45, I presume. You’re right; if north is up, the Moon goes around counterclockwise, not clockwise as shown. My assistant has excellent animation skills but not much of a head for astronomy; he often makes errors like this. Usually I catch them, but I guess I missed this one.” My reply – “Thanks for the confirmation! My HS astronomy students have been waiting with bated breath for a reply to my email. You are quite gracious in your answer and that allows me to share it with them and also show how adults constructively communicate via social media, etc. We here in PA are hoping for a clear morning on April 15th as you are I am sure.”

whiteley180
Create a free website or blog at WordPress.com.